By a 3-2 vote on Monday, the Whitfield County Board of Commissioners approved an agreement that will help finance a mixed-use development in the area around the north bypass and Pleasant Grove Drive. The Dalton City Council and the Dalton Board of Education unanimously approved the deal in March.

Board Chairman Jevin Jensen and Commissioners Barry Robbins and Robby Staten voted to approve the agreement. Commissioners Greg Jones and John Thomas voted against the deal.

The intergovernmental agreement among the city of Dalton, Whitfield County and Dalton Public Schools provides tax increment financing to The Township at Hammond Creek, which plans to develop 209 housing units as well as retail space in the Hammond Creek area, which is in a city tax allocation district (TAD).

Chuck Dobbins of Dalton’s Dobbins Properties, one of the developers, said the agreement was necessary for the project to move forward.

“We appreciate the commissioners’ support,” Dobbins said. “It does give us what we need from the TAD perspective to move forward. Like everyone else doing construction work today, we have to continue to monitor our construction budget to make sure we bring it in in a way that we can still afford the project. If all goes well, we expect to be moving dirt by this fall.”

The Township at Hammond Creek is a joint venture development of RH Ledbetter Properties and Charles Williams REIC, both of Rome, and Hammond Creek Capital of Dalton. Dobbins said the project will have an estimated construction cost of more than $42 million.

The Township at Hammond Creek is the first phase of a planned 92-acre development that would contain single-family housing, multifamily housing, commercial and retail.

TADs freeze the value at which a property can be taxed for general revenue. Taxes collected on additional value created by improvements to the property are dedicated to pay for infrastructure, public artwork or other amenities to attract a developer or developers to that area.

Voters in 2014 gave the City Council the authority to create TADs. The City Council has created four TADs. The others are the downtown business district, the area around Dalton Mall and the West Walnut Avenue/Market Street area.

County voters rejected TADs that year and again in 2021, but under state law the county has the right to join in city TADs if commissioners believe that is in the public interest. The county participates in Dalton’s TADs around the Dalton Mall and covering the downtown business district, which were created in 2018.

The agreement approved Monday guarantees developers 80% of tax increment funds from the increase in revenue resulting from development that increases the assessed value of the property. The city, the city school system and the county would get the rest.

The agreement will last 20 years or until the developers collect $5.9 million, whichever comes first.

“Today, the county gets just over $1,000 a year in taxes on this land,” said Board of Commissioners Chairman Jevin Jensen. “If the project moves forward under the TAD, county revenue will increase to over $110,000 in the first 10 years alone.”

Jones said he could not support the agreement because voters have rejected giving the county the power to create TADs. He said even though this is a city TAD, “this would be county tax dollars” that commissioners were voting to commit to the project.

Robbins noted city voters approved the use of TADs and the City Council and school board had already approved the agreement.

“The entire county needs some better housing,” he said. “This will expand also our commercial area and bring in substantially more sales tax.”

Thomas said the development “is a good project. It’s just not right for me.”

He said after the meeting he opposes “using taxpayer dollars for private development.”

Information provided by Dobbins said the apartments in The Township at Hammond Creek will feature nine-foot ceilings, stainless steel appliances and granite countertops and patios/balconies. Residents will have access to community amenities such as a clubhouse, fitness center, resort-style saltwater pool, playground, dog park and dog-washing station. The community will have gated access, a secured perimeter and secured garage parking.

Dobbins said he believes the location is perfect for development because The Dalton Academy, Dalton Junior High School and Hammond Creek Middle School are nearby, as are the Dalton Golf & Country Club, Heritage Point Park and the Raisin Woods Mountain Bike Park.

In February, an agreement to provide TAD funding to a 74-acre mixed-use development in Varnell died without a vote when no county commissioner seconded Robbins’ motion to approve the agreement. Staten was absent from that meeting, recovering from neck surgery. 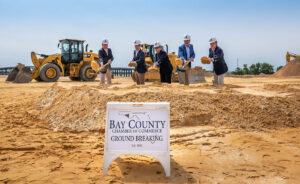 New shopping center in Rome on track for fall opening